We haven’t been very good about writing over the past couple months, but we have two very good reasons why. Their names are Rachel and Anna and they spent 10 weeks of their spring here in Italy serving as Tesori Raggianti’s first interns under Erika’s supervision.

Rachel came as a senior at Liberty University. Her internship with us was her last requirement for graduation with a Bachelor’s in Psychology: Counseling and Human Services. Rachel got connected with us because she was part of the “Authentic Treasures” team Erika led to the Near East (which was one of the formative experiences that led to the birth of Tesori Raggianti). Rachel is passionate about anti-trafficking especially in Europe and desires to serve in Italy long-term. It’s been pretty amazing to see how God continues to weave our lives together and it was great working with her again!

Anna also came from Liberty University majoring in Psychology: Human Services. She met Rachel at an event on campus about human trafficking and eventually connected with us as a result. She is in her Junior year and came to us to complete her volunteer hours, but served way above and beyond what was required. She was a delight to have with us.

Their primary role while they were with us was to assist Erika, Coordinator of Tesori Raggianti. This included a list of projects they participated in and helped us complete.

One of the major projects was our Tesori Raggianti website. They spent many hours researching and gathering resources to help us take it to the next level so that it now includes updated information and some new sections including a resource page with recommended articles, videos, movies and books to help motivated visitors get more educated about sexual exploitation in Italy and around the globe. Check out their work at http://www.tesoriraggianti.com

The other major project they saw completed while they were here was a public screening of Nefarious: Merchant of Souls. We had shown it in two private screenings last year, but while the interns were here we had it shown in the local theatre. They helped with everything from posting hundreds of flyers around town, to writing a script for the post-film presentation, to making pastries for the viewers to enjoy after the film. We saw God use the event to make some important inroads in the community and open doors for more future ministry. 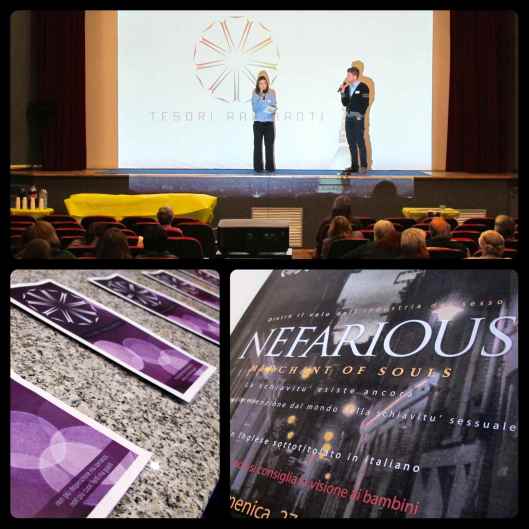 Top: Erika giving a presentation after the Nefarious film was shown // Bottom Left: Our brochures for those interested in learning more about Tesori Raggianti // Bottom Right: The flyers used to advertise the screening all over the 4 nearby towns

Rachel and Anna also spent time shadowing other members of the OM Italy team to get a glimpse of different types of ministry but their main local ministry, outside of their work with Tesori Raggianti, was weekly tutoring they provided for a little girl from the church we attend. Shiloh and her family lived in the States for awhile where she learned English. She wants to maintain her English speaking ability so Rachel and Anna spent time with her every week to help her practice. All three looked forward to their time together each week which made the goodbyes that much harder.

The interns and Shiloh

Over the 10 weeks they put in hundreds of hours of work. Most of these hours were spent in our home office so Jon and I were always busy for as many hours or more preparing and supervising projects for them in addition to other work we had to do, but in return we were able to get more done with four of us working than two! They brought new energy and passion to the Tesori Raggianti team and we are so grateful for all the ways they contributed to and completed many projects which helped the ministry to be more productive and effective.

While we got a lot of work done we had a lot of fun too. Every Wednesday we would have team lunches at ‘Tello’s Burger Shop’. Jon made a specialty burger each week for us to enjoy and it quickly became a highlight of the work week. We also had some movie nights, dinners at the pizzeria and trips to the gelataria. 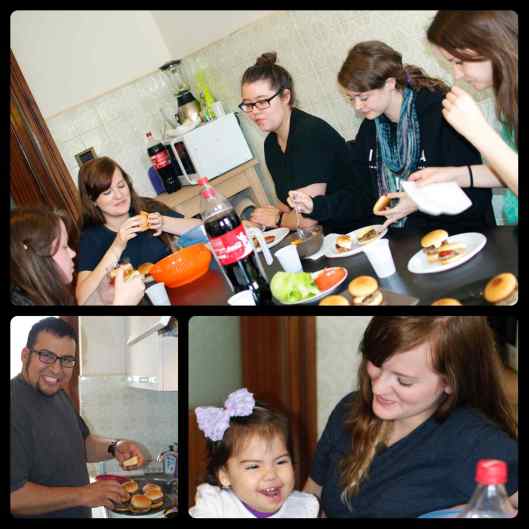 Our last burger lunch together the day the interns left

The interns also attended church with us where they were embraced as part of the family there. On the last Sunday they gave a testimony about their experience. They both spoke about how God used their time here to grow and change them in exciting ways they would never forget. What a blessing it was to hear that!

Sharing their testimony at church on their last Sunday in Italy

Before they left we had a time of debriefing to help them process everything they had experienced, gain insight from it, and solidify truths they had realized along the way. One of the main ways we did this was by creating a timeline of events and then identifying things like memorable moments, challenging events, and times of growth. It was neat to see it all on paper. They also completed an evaluation for us to help us learn from the experience as well. Finally, we spent time preparing them for re-entry by talking about things like reverse culture shock and other areas to help make the transition back to life in the USA easier.

Over the weeks they were here, Rachel and Anna not only became a special part of our team but they became a special part of our family. Arianna loved seeing them in the office each day and the attention and play time they gave her. They will be missed for these among many reasons, but we were privileged to have witnessed what God did in and through them while they were here and we look forward to seeing what He has in store for them!

1 thought on “Our First Interns”